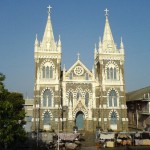 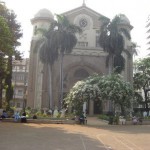 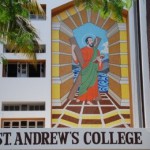 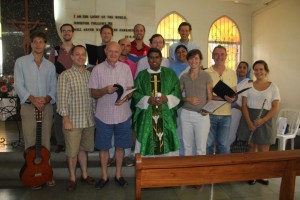 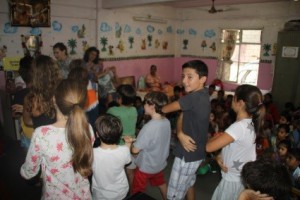 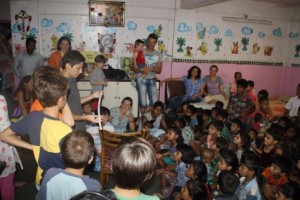 This is how the Mission was presented to the congregation during the celebration of our first mass by Fr Dolreich Pereira on Sunday, the 12th June 2011:

“For where two or three are gathered in my Name, I am there among them” Matthew, 18-20

“Be informed, share, pray with the French-speaking Catholic community in Bombay. French-speaking Catholics are presently scattered all over the city of Bombay. There is no parish to unify this community. We need to gather together to proclaim our faith in French, for the significant events of the Catholic Calendar, to give a religious education to our children, to meet, to pray…A group has been set up to create a parish dynamic. We come to you today to try to understand better the “spiritual” expectations of you all. Thank you for taking some time to give us your feedback on this.”

The response to this appeal was above our expectation. We now have monthly masses and offer catechesis to more than 40 children. We have 3 groups which meet for an hour before mass: one for 5-7 year old children, 1 for 8-11 old year children and one for middle school students. Seven children have received the sacrament of Holy Communion on Pentecost Sunday, 27 May 2012 and five on Sunday, 26 May, 2013. We have received 11 requests for Baptism: 3 children have already been baptized in Bombay.

At the first mass we were only 28, but now we are more than 100! What are some of the reasons that have attracted people to this community? In the words of some of our members:

“The mission changed our life in Bombay for many reasons:

– it has enabled us to meet amongst Christians of the same culture and same language. The frequency of a French mass once in a month allows us to carry on with discovering how Indian people practice their faith in their parishes.

– It allows the transmission of faith in our language which is very important especially with children. It also attracts adults who were not so familiar with mass.

– It has created a real Christian and French speaking community, building friendships among us which is very important in a difficult city like Mumbai.”

As part of diakonia, we sponsor and support associations like Swagat Ashram, The Roses of Mother Teresa, Un Toit pour Bombay (A Roof for Bombay) as well as Prerana Trust, Raigad which works for the upliftment of the oppressed. Many of us dedicate themselves to take care of elderly people, children and deprived people. There is also a group of mothers who meet every single Monday to pray.

We would like to pay a special tribute to the Major Seminary of Bombay and to Father Dolreich, our Chaplain, who has been showing great dedication and who supervises all initiatives. Working with him has indeed been a real blessing and provided a learning experience for us. We are also grateful to Father Aniceto Pereira, who allows us to celebrate our masses at St Andrew’s College Chapel, in Bandra.

This is some of the feedback we have received from the youth animator. Young students are already considering special initiatives for Advent and Lent next year. They are motivated and dedicated, as expressed by their animator:

“A few words to express how thankful we are as a family: being able to come to mass in our native language once a month is awaited from our 3 boys !

I am also amazed and wondrous of the faith and good will of the teenagers. They have shown this year how much they want to follow Christ and act concretely. They loved the powerful testimonies and are ready to move on for their next actions (Christmas and Easter)!”

“The French Mission in Mumbai is young but very much alive. Everyone is welcome here. One can see that some members are more modern, while others are more conservative, but they all come together to pray to God under the guidance of a wonderful priest, Father Dolreich.

My experience with the French Mission is special, as is my encounter with Father Dolreich. This is because my adopted eight-year-old daughter, Sarah, who was previously Hindu, has decided on her own to become Catholic and who, thanks to Father Dolreich, got the feeling that she is most welcome in that community. He became for her a bridge with God and also, in a certain way, a bridge with the French community in Mumbai. I thank Father Dolreich sincerely for his guidance, friendship, and support. Thanks to him and to my daughter, I have returned to the Catholic Church.”